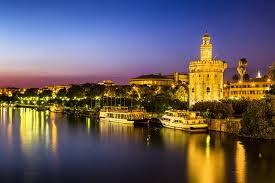 New flights to San Pablo Airport will take off three times a week from Frankfurt and once a
week from Munich starting from 26th and 29th March 2015, respectively.
Recent agreements allow Seville to collect new destinations in 2015, increasing up to 23
the number of direct international flights from Seville airport. Among them, new routes
that connect the Andalusian city to Germany will be introduced by Lufthansa.
Indeed, starting from next spring Seville will count on a new direct flight to Frankfurt,
which will be the first Lufthansa direct connection to the capital of Andalusia. This means
gaining a long-awaited route which is essential for the development of the German
meetings and events market with Seville, as well as the connection of the city with
important intercontinental flights arriving at one of the busiest airports in Europe.
The Frankfurt-Seville direct flight, one of the additions to the Lufthansa network starting
next season, will take off three times a week on Tuesdays, Thursdays and Saturdays (SVQ
13.30 – FRA 16.20; FRA 09.20 – SVQ 12.15) starting from 26th March 2015, with a positive
impact on both the city and the province of Seville.
From Munich, Lufthansa flies direct to Seville once a week on Sundays (SVQ 12.45 – MUC
15.35; MUC 08.55 – SVQ 11.55) starting from 29th March. Nevertheless, increased
connection chances with other parts of Germany and overall with Frankfurt give to the
capital city of Bavaria a further interesting connectivity value.